There was a bug that caused dilute rabbits to have mismatched eyes. All dilutes in poses where both eyes were visible were effected. We had to remove this so that having both gray eyes would be possible on the site again, but have re-added the dichromatic condition as a rare abnormality.

You may now notice some dilute rabbits with this rare condition. In order to make it more noticeable in poses that don't have both eyes visible, it can now be seen in color names as 'Dichromatic.'

Dichromatic has also been added to the color names of rabbits with eyec and different colored eyes.

Color names have been added to the rabbit search.

There was also a bug that caused heterochromia in vienna, causing one blue eye. This is going to be re-added as well in a separate update (ot will be programmed separately from dilute heterochromia).

There's a big update today to Spirits! The Spirit color now comes in 5 possible variations, so you can get many more different markings than before!

A big thank you to CarrotCube for most of the added spirit marking artwork!

Please note: In order to prevent changes to previously existing rabbits, the new markings are only attainable to rabbits at IDs 308820 and above. This means that snowflakes will not work on rabbits with an ID lower than 308820. If you want a rabbit changed to a new ID, check out this thread.

There's a new pose on Warrenz! You can find them in various areas starting with the Cityside Park. They can also be found at the Spirit Tree and in the April Garden. 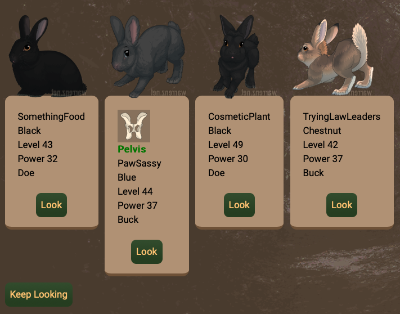 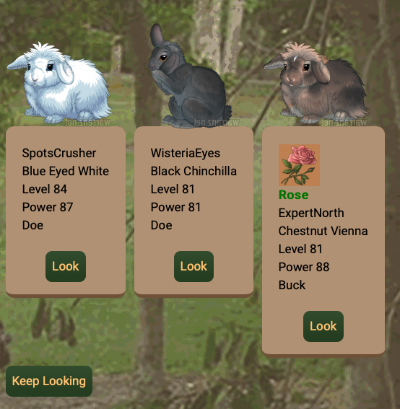 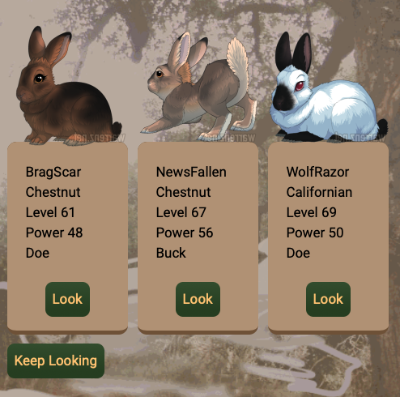 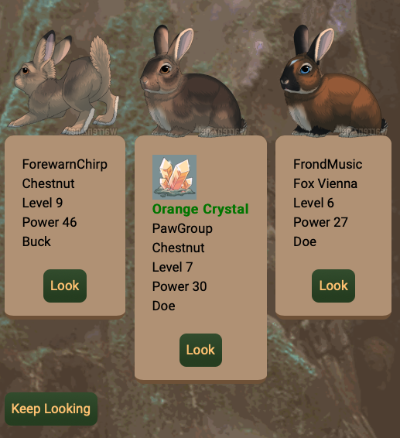 There's a new credit item that allows you to preview the rabbits found in explore. Preview Specs will last for half an hour and will stack if multiples are used.

They can come in handy for chimera hunting, or searching for other nice colored rabbits. They do not affect odds of finding certain rabbits, but they allow you to view all three images without clicking on sillhuopettes. Thank you, CarrotCube, for doing the Wilds, Spirits, and English (TBA) for these!

The 'Find Rabbits' feature has been given a complete recode! You can now find rabbits without worrying that they will disappear if someone else finds them first. Unlike in the previous system, this new explore will generate a new rabbit any time you find one (so no one else can find your rabbit).

Another major difference between the two systems is that the old one involved the use of premade rabbits from the database. The new one has no premades, so there is a much greater variety of genetics and other factors in the rabbits you will be able to find in each area.

There is a new default foraging ability that any rabbit can use, including ones who don't have any foraging skills. It has the same effectiveness as Sniff Around and is called Basic Forage.